The Trade War Conundrum: Revealing the Truth About China

I have spent the last month investigating one of the greatest capitalist stories of the recent era, a story that all US investors should grasp.

For better or for worse, it is Huawei, the Chinese multinational telecom equipment giant.

It has recently been condemned by the US government as an instrument of the Chinese communist party and military.

Yes, Trump has eased the ban he previously placed on the company. Yet Huawei still poses a conundrum for Americans and advocates of enterprise.

And I am no exception. 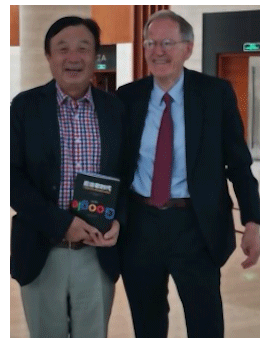 I was recently invited by Huawei’s inspirational leader and CEO, Ren Zhengfei, to fly to the company’s headquarters in Shenzhen, China. He asked me to come discuss the future of blockchain and other technologies.

At one point, when I stood next to him as he flaunted my book Life After Google for photographers (pictured to the right), I felt conflicted.

As an American conservative, I generally support my government. At the same time, however, I believe that the Trade War with China represents a severe misstep — one that will cause irreversible damage.

Not just for US technology corporations and investors, but for the entire nation.

One of the facts of life in 21st century investment is the colossal growth of capitalist companies in China under the authoritarian political rule of the communist party.

Ultimately, banishing US companies from China means excluding them from the world’s largest and fastest growing capitalist market. By complying with this crippling policy, US investors do not support their country; they hurt it.

China’s ascendancy is a fact of the world that we should accommodate with our businesses and — without adversarial rhetoric — recognize in our military budgets and policies.

Now, some Americans will avoid investing in China no matter what.

This is a mistake.

Again, I understand the conundrum. But when I compare what I see in China to what I’m witnessing in the United States, I believe we could learn something from their momentum.

American investors who avoid the Chinese market are restricting their focus to a probably diminishing capitalist domain in the West — one that is heavily committed to political correctness and what I believe is an anti-capitalist academy and environmental cult.

When I travel in China and speak at their major universities, I encounter a fanatical interest in business and technology and no advocacy of communist politics.

In the US, where I am often excluded from prestigious campuses, I encounter leftist agitation at every turn — along with widespread hostility to capitalist business and industry.

The US environment may well change for the better. But at present many of our campuses are a dismal swamp of political correctness and socialism.

Of course, there are several intriguing investment opportunities in the US. (In fact, I just revealed a few of my favorites to members of my new research service, George Gilder’s Moonshots. Click here if you missed my presentation last week.)

But a fully diversified strategy requires that we reach out beyond our shores.

US investors who want to participate in the new global technology paradigm must emulate US technology companies themselves and seek opportunities outside the United States.

From Microsoft to Google, Ford to Apple, US tech leaders are finding new breakthroughs in such founts of creativity as Shenzhen in China, Zug in Switzerland, Tel Aviv in Israel, Tallinn in Estonia, and Taipei in Thailand.

We plan to follow their example and open this exciting future to you.

While continuing to point out new opportunities aligned with our paradigm in the United States, we will also be exploring new channels for investment on the frontiers of capitalist creativity around the world.

The Future of Wireless, Harvested by Wi-Fi 6

Whew! Investors across the country are sighing with relief at the apparent end of the Bernie Sanders threat. Super-Tuesday supposedly issued a reprieve for American capitalism.

Why So Serious? Taking a Lesson from the Joker

Is “Joker” the devil or a clown or a victim or a prophet? Or is he Donald Trump, ravaging the constitution and economy?

A Case of Malpractice

Get back to work and investing, folks. Leave this ghastly self-inflicted wound behind us. And be careful not to duplicate it with the ritual self-abuse of the climate change cult.

Time-Prices Are Opening Up Pandora’s Box

I hope my readers have patience with my preoccupation with the time-price revolution. It presents a massive opportunity…

Coronadoom Will Always Be with Us

In one way or another...

The Success of Tesla Depends on True Science [Part 3]

The Biggest Scandal of the Decade