Blockchain: The Technology of the Future

Last week, I discussed in depth the truth about blockchain and internet security in a few of my Daily Prophecies.

I even shared my views on the bitcoin prophecy.

You see, the blockchain aims to be a distributed immutable database for timestamped transactions beyond centralized control. With a mathematical hash or fingerprint of all transactions on every node in the network, it is impossible to hack without capturing more than half the nodes.

The more that is spent on internet security the less secure becomes the net.

That being said, I thought today would be a good opportunity to share my interview with Peter Robinson.

During the interview I argue that cloud computing, while it was the hot new technology ten years ago, has reached its limits as the physical limitations of big data storage centers maxes out. I explain that improvements in parsing big data are incremental at this point, and it’s time for the next big technology to take its place.

I point to blockchain as the technology of the future, with its ability to prevent corruption and manipulation of transaction data and the infinite uses it could have in third world countries. 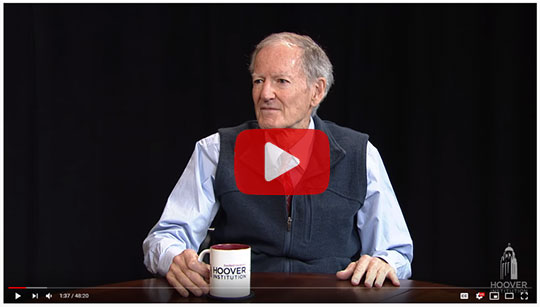 Understanding the Permeability of Free Space

Back in the year 2000, I published a book entitled Telecosm: The World After Bandwidth Abundance. It taught me many lessons about the future, including the treacherous pitfalls in predicting it.

Facing Off with the Terminator of Wall Street

The Economist magazine has found the new Master of the Universe and it’s… Arnold. Not in his role as the RINO former governor of California… but in all his Terminator glory. We’re just talking about a different type of machine...

Time-Prices Are Opening Up Pandora’s Box

I hope my readers have patience with my preoccupation with the time-price revolution. It presents a massive opportunity…

Analyzing the Thoughts of a Modern Era Churchill

Looking at a previous prophecy about China...

In an information age, economies can change as fast as minds can change.

Finding Common Ground in the World of AI

I’m covering an epic debate between these two tech giants…