My Conversation with an Oxford Botanist-Agronomist

“It’s the end of the Enlightenment, which enshrined the scientific method, established the enduring norms of scientific ethics and practice and underlies our entire civilization. When I did science, you’d rather die than twist or distort the data for some agenda. But it’s all over now. Scientists all go to University and swallow pills of politics. I don’t know whether it is curable.”

I’m in Cumbria in the Northwest corner of England, somewhere near the Arctic Circle as I understand it — right where the sun rarely shines, discussing global warming. Speaking out on the lapse of the Enlightenment is my eminent cousin-in-law Timothy Palmer — an Oxford zoologist and agriculturalist — and first cousin of science writer Viscount Matt Ridley.

He tells me Matt has just published an article on “Why the last decade has been the best in all the history of human civilization.” I noted that he is a fellow advocate of time-prices, which clear away the clutter of doom-laden data.

That sounded like a festive way for us to enter the new decade.

I’m here for a 70th birthday gala celebration of my wife Nini, an architectural historian who attended Cambridge University to the South and befriended our host Richard Vane.

Below you’ll see an image of the castle where Nini had her birthday celebration, Hutton in the Forest. 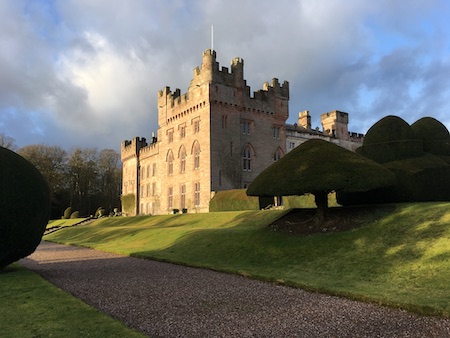 Now Lord Inglewood and a cosmopolitan voice in the House of Lords, he rules his impressive demesne with his elegant photographer wife Cressida, who shares Nini’s birthday and interests. They are gathering the party in their rambling castle Hutton in the Forest.

Solar Panels and Windmills = A Threat

The place is thronging with scientific talent, from professors of cybersecurity and philosophy to Oxford botanist-agronomist Antony Leeming, along with Timothy. Leeming is complaining about solar panels in the neighborhood.

“Solar panels,” he tells me, “actually cause global warming.”

I hadn’t heard that before. To evoke more details, I said: “But the reason they are installed everywhere is to stop global warming.”

“Well they actually cause it,” he said with professorial authority. “They’re black bodies.”

“That means they absorb 100% of the incident radiation. They eliminate the reflectivity of the earth. Solar panels have zero albedo. They warm up the earth by absorbing all the light that hits it. Where ever they install solar panels, they replace foliage or other surfaces that reflect light into space. Everywhere else the terrestrial parts of the planet are green — you can see the rainforests from space as green — or in the arctic blazing white. But the ever-increasing acreage devoted to solar panels is always black. No heat gets out.”

I asked about windmills. Turns out windmills also could be said to cause global warming. They occupy the only scarce planetary resource — the arable surface of the earth. Acreage that could otherwise be devoted to growing plants that absorb CO2.

But Leeming was not sure. “I don’t believe in the CO2 theory at all,” he said. “Humans represent a trivial factor.”

Timmy asserted that none of these so-called energy sources actually provide net energy at all after you consider the necessary batteries and add in the increasing complexity and vulnerability of power grids that have to back up and buffer the erratic inputs of sun and wind. “It’s all a horrible waste,” he said.

“Even electrical cars probably are a negative factor in the climate calculus,” I said. “They’re nice and silent and all and have instant acceleration. There’s nothing wrong with them really. But the battery in your Tesla weighs 1,200 pounds and provides the power of just 60 pounds of gasoline. In energy terms, they’re one-twentieth as efficient as an internal combustion engine. If you want to save energy, petrol is the way to go” (when in England, I try to speak English).

“It doesn’t pay to shuffle electricity around the country. You want distributed power, not more reliance on a centralized and vulnerable grid, making it more vulnerable. Solar and wind makes the grid more hackable.”

I offered my usual riff, “These are druidical sunhenges and Quixotic totem poles of a new Doomsday Adventist religion.”

“Yes,” said Timothy, “Greta Thunberg [the 14-year-old Swedish pasionaria of climate catastrophe in twelve years] is like a new age Joan of Arc.”

We all sighed in agreement and moved on to more festive conversations.

But just for a corrective view, after talking to all the bio-scientists and farmers, I engaged with the eminent computer scientist and expert on cybersecurity. He had a different view, developed through the study of software in an academic environment.

I wanted to discuss cryptocurrencies with him. But he burst in with anguished alarms about climate change. A major threat, as he saw it, “is Bitcoin. It uses the energy of two countries just to mine the currencies!” he said indignantly.

As Timmy had told me, they all take pills of politics and cannot think straight anymore.

One of the towering spurious data points of our age is the idea that 97% of scientists support global warming catastrophism. In my experience, wherever I go, from China to Cumbria, is that the supporters are mostly on government grants and payrolls. Independent scientists, particularly retired scientists, dismiss the threat.

Intelligent investors should not bet on the triumph of a doomsday religion as an investment boon.

Climate change quackery is a serious threat to the future of our economies and technologies and the quality of our sciences.

Overcoming it is essential to compete with the challenge of superb Chinese companies and engineers.

We Need to Stop this Technological Suicide Immediately

Steve Bannon says China will be central to the 2020 election. He wants President Trump to run against Joe Biden and his son Hunter as sellouts to Chinese communism.

Brian Wesbury is perhaps the leading supply side economist. So, let’s quote him on the coronavirus panic.

In China I get clues to the future of technology, in Britain I get foretastes of the tang of political correctness.

The great Peter Drucker doesn’t believe the US is capable of being a microchip leader. I disagree.

With Facebook unveiling its new Libra coin, the company has made itself extremely valuable…

Life in Tech is Full of Poignant Surprises

Whenever I go to Silicon Valley – the real place, not the mind space – I try to catch up with my friends and counselors from the old days.

A Strong and Sturdy Way to Play the New Economy

If you have read my book, The Israel Test, you know that there are many reasons to love Israel and invest in it.