My O.G. Breakthrough in Vanity Fair

I ain’t no super hero

I ain’t no Marvell Comic,

But when it comes to game I’m atomic

At droppin’ it straight

O.G. is short for “Original Gangster.” Which also happens to be the name of Ice-T’s breakthrough rap album of 1991. Now in Urban Slang, it means original disruptor.

“O.G.” That’s me, according to the latest 26th Annual issue of Vanity Fair.

My O.G. breakthrough of the same time?

It was called Life After Television. According to Vanity Fair, it was “The 1990 book by George Gilder that inspired super-agent Ari Emanuel to embrace the streaming era.”

It was where I predicted the smart phone as the dominant computer of the new era, and where I broached the idea of bandwidth abundance and explored its effects. It was where I prophesied the downfall of all the forms of TV and predicted that because of the increasing ability of companies to target ads to particular people, “You will no longer have to see any advertisements you don’t want to see.”

You can find the image readily. Just scroll through all those sumptuously sensuous and incendiary displays — from Gucci to Prada to Tiffany — for fashion, cosmetics, and jewelry. You’ve got to be persistent, push past all those ads that you really don’t really want to see but which snare your eye with flare, flesh, and gotcha faces. Finally, if you don’t flag, you will arrive at the contents pages of the latest issue.

There down in the corner of page 38 is a picture of the paperback edition of Life After Television with a headline in cap: HOLLYWOOD’S O.G. FUTURIST (shown below). 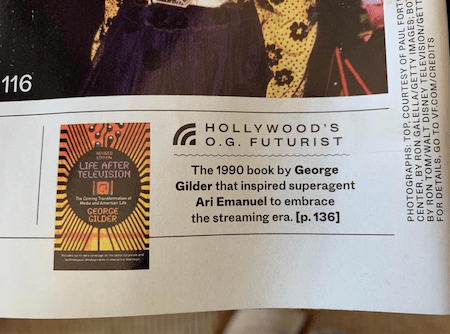 I’ll take it. I earned it with many trips to Hollywood to regale Ari’s agents and affiliates with my vision of the future of media.

So when Ari decided to take William Morris Endeavor (WME) public a couple months ago, I was invited to join the show at the New York Stock Exchange bell ringing. It was to be a boffo event where “Nerve Agent” Emanuel “planned to put his agency and the very power structure of Hollywood on the line with an audacious… public offering.”

I drove an hour and a quarter to Wassaic — off New York route 22 — the nearest train station to my home in Western Massachusetts. Then I boarded the train for a two-and-a-half hour ride down to Grand Central. Then I took a taxi downtown to my hotel “W” near Wall Street. I checked in for the night and woke up fresh the next morning ready to come out and carouse at Ari’s coming out party on the stock exchange as an O.G.

Next to the elevator, coming down for coffee, I learned from the lead in the Wall Street Journal that the show was cancelled.

Vanity Fair told the story: Ari’s ascent as entrepreneurial star, the smartest fastest-talking most flamboyant agent in the world, and the inspiration and sponsor of the character “Ari Gold” in the TV show “Entourage.”

Written by “Ankler” entertainment newsletter editor Richard Rushfield, the article recounted Ari’s eclipse of all the other super agents and superagencies, and his drive to an Initial Public Offering and public wealth. He was ready to take on the giant networks of Silicon Valley in behalf of his bevy of Hollywood talent, pro athletes, writers, directors, authors, and speakers.

But it didn’t happen. As Rushfield put it, “In the weeks ahead of its planned IPO, high-flying tech launches built by charismatic founders had floundered or wrecked beneath sudden Wall Street skepticism.

WeWork’s smashup, still unfolding as the Endeavor gang gathered in the Goldman offices, was so spectacular and tragicomic that it sucked the appetite for newfangled business models right out of the market. Then on the eve of Endeavor’s pricing, Peloton’s cultish home workout offering hit the skids.”

You can see an excerpt of the article below.

(You can read the full article here.)

I returned to my train and car and drove back to meet my wife Nini in upstate New York, where she was giving a speech on her book, Edith Wharton’s Lenox.

According the Vanity Fair, the failure of the Endeavor offering also had something to do with flaws in the Endeavor plan. But in fact there was nothing unusually awry. The problem is the collapse of the IPO market in general.

Under the regulations of Sarbanes-Oxley and other political overreach, the number of IPOs in the U.S. has dropped some 90 percent over the last 20 years. There are now three times more IPOs in China than in the US. The number of public companies is down 50 percent. As much as 80 percent of the market for many existing stocks comes from buybacks by companies of their own shares.

It is a reflection of what I call “the outsider trading scandal,” where computers and big data algorithms control 60 percent of all trading activity and 60 percent of all institutional equity. All that matters are backward looking numbers.

The rehabilitation of US markets should be a major goal of economic policy over the next era. That’s my O.G. declaration for today.

For all his entrepreneurial incandescence, Emanuel could not buck the tide.

Identifying Promising Moonshots with Help from Around the Globe

Moonshots are no respecters of persons, nationalities, or credentials…

“Yes, we are on a long, lonely trail…” writes the inimitable poet of prophecies Bill Bonner, “wandering around between life and death… between six feet apart and six feet under…”

The Needle in a Haystack: Understanding Moonshot Entrepreneurs

Around here, we believe that the future is not algorithmic. There are no needles in that haystack of media clutter and clichés.

Trump Triggers a BUY for This Sector

This week I’m vamping in Vegas! I’m penning the Daily Prophecy letters from FreedomFest — the annual libertarian carnival of ids and ideologies, investment ideas and catastrophe pitches — at the Paris Resort. By the way, do you know why the rooms are cheap here? Because there are thousands of gullible galley minions pumping away...

A Tsunami of Technological Transformation

Ordinary investors should leave the surf and froth to the flash boys, and seek the tsunamis of new technological transformation…

The Promise and Entropy of Information

On my plane to Silicon Valley I met an unlikely friend who inspired today’s prophecy.