A New Immune System for the Internet

Is the world ready to transcend COVID–19 and move on to COSM–20?

The human race has transcended many a similar virus threat in the course of rising up to dominate the planet with a complement of some eight billion souls.

Take cheer: If our immune systems didn’t work, we wouldn’t be here.

The existing world political and economic order, however, seems to have missed out on its immune system and is proving inept at addressing this familiar threat. From China to “Maskachusetts” where I reside, to Minneapolis where I am visiting with one of my Gilder Press analysts, Richard Vigilante, politicians are making fools of themselves over once simple matters of health and security.

In Minnesota, under Governor Tim Walz, as in Maskachusetts, one cannot even sit at a table and have an espresso with a friend. But our history tells us that in the darkest hours are hatched the most redemptive innovations.

An important speaker at my COSM conference near Seattle last year was Giuseppe Gori of Gorbyte Corporation. An “internet legend” as a pioneer of packet networks in Italy in the 1970s, he is now a pioneer of a new internet architecture based on a second generation of blockchain.

At COSM, he met with Dan Berninger, the telco innovator who is now developing a COSM architecture for Intel. From several streams of innovation, a new internet and a new world economy is emerging with blockchain at its core.

Existing blockchain offer a vast upside for investors in a new world economy. But they suffer from caps, limits, and subtle flaws that make them cumbersome for transactions and vulnerable to centralization.

“At Gorbyte, we have designed a stochastic crypto–network that will replace the current generation of leader–based consensus blockchain networks.

One of Gorbyte’s major innovations is a system of unique identification that involves peoples’ personal devices.

Device owners can be associated, through the latest live biometrics techniques, to a number of devices they own (e.g., mobile, tablets, PCs, etc.). These devices are Blockchain Registered Unique Devices (BRUD), which are uniquely addressable and with a unique identification. Their digitally signed registration is stored on the blockchain.

Each of these devices is a node of a distributed, public network made up by these devices. There is no intermediary entity that owns the network, there are no miners, producers or verifiers, and there is no authority assigning numbers, keys, or identification.

I am not going to repeat here how this is achieved. You can refer to my articles and to my book “Reinventing the Blockchain.”

In this article I address one of the major implications of unique device identification, verifiable on the blockchain: The birth of a secure communication system between peer devices, or internet 2.

A number of security challenges, in the current internet, derive from two issues:

Although the two issues seem to be of opposite nature, they derive from the same design.

The assignment of IP addresses from a central authority, which is delegated to a hierarchy of lower authorities, creates opportunities for malicious actors to attack these critical hierarchy of databases.

On the other side… hackers have found ways to generate messages, virus infested programs, and mount DoS attacks on network nodes, and be virtually untraceable.

The result is that IP addresses, used for Internet routing, are unreliable for any other use. Security protocols developed at the higher levels of the internet are ineffective in preventing attacks using lower level datagrams.

While the current internet IP addresses and domain names are assigned by a central authority… node addresses can be unique and can be generated by each device connected to the internet (I will call this a node).

The ability of each node to generate its own address, that is a number generated in the same way we generate encryption keys, eliminates the need for central authorities and their hierarchy.

But this is not enough. As we have done at Gorbyte, we need to associate a unique address to a unique device, with its own unique identification and encryption keys. By association, and by biometric pairing, the device owner is then uniquely addressable. Furthermore, this device unique identification is verifiable by anyone on the blockchain.

Currently, bad players in the “dark web” can SPAM, steal, attack private and public databases, issue viruses and blackmail people and corporations because their address cannot easily be traced.
In addition, even if the original address could be traced, in many cases it would be impossible to know which device was using that address and who used that device at the time. The association between IP addresses, devices and people is temporary and untraceable.

With blockchain technology, and with GNodes addressing, we achieve the opposite. The association between a network address and a device is unique and verifiable on the blockchain. Furthermore, only the device owner can use that device.

As the GNodes network will become more prevalent, its unique addresses will be used in conjunction with IP addresses.

The internet addressability evolution from IPv4 to IPv6 has taken many years. Now we know how to safely and progressively change the addressability scheme of the internet. Going from IPv6 to URIP (Unique Random IP addresses) will be simpler.

The URIP will take approximately double the amount of bytes of current IPv6 addresses (Source Address and Destination Address in the following diagram) and can be used in exactly the same way. The longer fields of URIPs could also be made of variable length, to adapt to the internet addressability requirements, as billions of IoT devices will need to be connected. 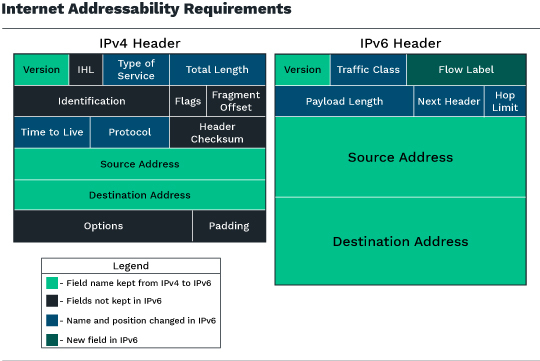 In addition, internet routers accepting external connections will have to support the blockchain. These are mostly the ISP routers, but eventually all Internet routers will need to be upgraded.

The fundamental change, for these routers, will be the verification of the source URIP address against the BRUD (Blockchain Registered User Device) on the blockchain. Datagrams or packets that do not match a registered BRUD, will not be routed. Malicious players, without a BRUD, will not be able to move packets more than one internet hop away from their original device.

As application developers will want to achieve the best possible security, they will continue to develop and promote applications based on URIPs.

Eventually, when all routers will have included support for the blockchain and URIPs, a date could be set to pull the plug on IPv4 and IPv6 addresses.

That will be the end of the dark web and the new era of secure communication. DoS attacks and scams will become much more difficult. Everyone will always know where received messages comes from. ..

In the early 80’s we could have paid much more attention to Internet security. But perhaps we could not have come up with a simple solution without blockchain technology. Now we can.

Can you imagine a world without viruses, Trojan horses, phishing, scams and database attacks?

A world where people and businesses can be known to be accountable for what they say, sell, and do?”

That is Giuseppe Gori’s plan. I believe it expounds the principles at the heart of a new COSM architecture for the internet and the world financial system.

The Chinese have already launched a national blockchain platform as a “core technology.” They are launching a new digital currency.

While the media obsess about immune systems against viruses, a new immune system for the internet is emerging from the blockchain.

My prophecy is that the COSM architecture will prevail over the next decade. It is already well under way.

My Interview with Forbes Magazine [Part 2]

The Success of Tesla Depends on True Science [Part 3]

Gale Pooley Weighs in on Time-Price

Gale Pooley, one of the inventors of time-price, assited me in answering some of your questions…

Inside, an excerpt from the November issue of The George Gilder Report...

Grasping the Future of Security

I’m slowly returning to normalcy after being upside down in China!

I’m currently in possession of game-changing technology. And my team thinks I should show it to President Trump.

The Search for Spectrum Unearths a Disruptive Innovation Paradigm

An excerpt from the April issue...