I’ve been traipsing around the country doing interviews, visiting the great John Schroeter of Moonshots, and Gilder Fellows zooming in Seattle. Diverting myself while I still can with cute dancing women on TikTok, or with Matt Ridley’s rousing new book on How Innovation Works, or with investors in California at 1517, and at Taylor-Frigon and its Israel strategy.

I also enjoyed encountering my book, Life After Google, as a “business top seller” at the Amazon store near its Seattle headquarters. (See image below.) 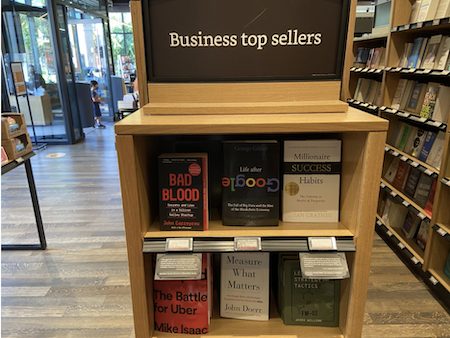 I learned from all of my encounters — but as usual, most from Carver Mead — the visionary source of Moore’s Law, tunnel diodes, 25 new companies, and now a series of scintillating insights on physics. I’ll have his biography finished one of these years, but he keeps adding revelatory new chapters. Until then, for much of it, you can read Microcosmand The Silicon Eye.

My favorite mode of thinking is analogy, or pattern matching. So all of my cerebrations on my trip led me back to an innovative book of dialogs on science by Robert Scott Root-Bernstein, Discovering: Inventing and Solving Problems at the Frontiers of Scientific Knowledge. It came up with an analogy of the discovery process consisting of nine dots in a box pattern that have to be connected to each other with lines. (See image below.) 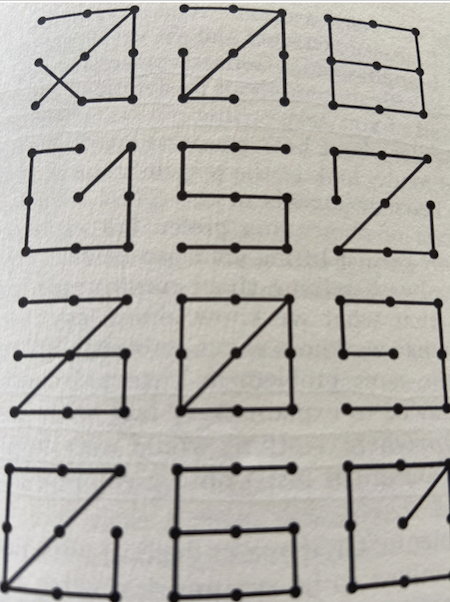 Linking them with five lines is easy, yielding multiple solutions. Four lines, though, entails “thinking outside the box” coherently (the pencil need not leave the paper). Then to get three-line, two-line, one-line, and no line solutions requires radical changes in assumptions such as folding the paper like a protein, resorting to Riemannian geometry, and other extremities suggestive of Einstein’s general relativity: Throw away rigidities of the measuring stick and time. Time and space coordinates become elastic.

Whether or not this analogy is seriously relevant to scientific progress, I have to report that it closely resembles the actual path of the one transistor memory cell in microchips.

Thinking Outside the Box

The industry began with six-transistor static random-access memories (SRAMS) with two flip-flops. Then it moved to four transistor dynamic RAMs, and then to three, two, and one transistor memory cells based on capacitors. It ended with the model inherited from the disk drive of the zero-transistor cell, consisting of a single magnetic domain, molecular memory, resistive, or phase change effect (Ovonic) device.

The memory chip industry did have to think outside the box and then dissolve the box.

Next come solutions to the memory problem of making memories that function at wire-speed as the wire crystallizes into fiber optic glass. These new approaches entail seeking “store width:’ moving the arrays of storage devices to datacenters and accessing them in massively parallel processes. In other words, breaking all the rules: that memories are supposed to be local and symmetrical and concentrated on particular microchips coupled to immediately reachable central processing units.

Anyway, such analogies are fun to play with in this delightful book. But perhaps they fail to illuminate their subject very much. There is little entropy in this book, and what there is mistakenly identified as non-information — information as order, entropy as disorder. To imagine information is order rather than disorder is the great mistake made by many people, such as Ridley, who imagine they understand information theory too quickly.

As an explanation of innovation, I already had heard of “bisociation” from Arthur Koestler, gestalt shifts, paradigm changes, Eureka moments, and “thinking outside the box” for gosh sakes. I had already spent too much time mulling over Thomas Kuhn’s view of Scientific Revolutions as paradigm changes that render all predecessors wrong, and with the new paradigms soon to be supplanted themselves.

Perhaps the problem of seeking illumination of the subject of illumination (perceiving analogies among arrays of analogies as Adam Ulam defines “great math”) is that light does not impact light. It passes through with transitory interference, offering a momentary illusion of traction but does not leave an enduring trace. Same here with paradigms.

On the other hand, I have to admit that I learned more from Root-Bernstein’s discussion of the scientific method as expounded by Karl Popper. Popper is a key figure in my information theory with his principle of falsifiability as the test of a scientific proposition (or, in the form of bankruptcy, a business proposition as well).

Root-Bernstein regards falsifiability, for all its theoretical heft, as a nearly useless technique for actual scientific work, since everything can be falsified in one way or another. The assumptions of the experiment dictate its outcomes, which in turn are seen differently by different observers.

There is a mythology of conclusive tests or proofs. But when you examine the most famous experiments of history you find that they were mostly inconclusive, but that the magic of the moment caused an adrenal or even endorphin rush to judgement.

Einstein’s general relativity was supposedly vindicated by a measurement of Mercury’s perihelion that could not be made by the apparatus with sufficient accuracy and that in any case could not prove relativity to the exclusion of other hypotheses (Signac effects, etc.). Einstein was vindicated for the supreme elegance of his thought, not for its empirical validity.

David Berlinski’s paper on the “Origin of Matter” makes the telling observation that all the math used by Einstein in demonstrating the elasticity of space and time — “mollusks” — assumes the absoluteness of space and time. Carver Mead dismisses much of the famous experimentation in quantum theory on the basis of fuzzy apparatus.

My conclusion from a near lifetime of interviews with Mead — and from reading Ridley’s superb book — is that the muddle of scientific epistemology and Thomas Kuhn’s cyclical scientific “truths” here today and gone tomorrow, is resolved in technology. Science may be riddled with contradictions and paradoxes and reversals. But technology is demonstrably cumulative. It has to work.

I’m betting on Mead to reform physics before he is through, because he has spent his life working with silicon at the quantum level. He created the first quantum device in America, his tunnel diodes, and he has designed hundreds of analog and digital circuits in his Caltech labs.

We live in a crazy era when my Governor Charles Baker wears a black mask with “Believe the Science” on it, when no science supports the wearing of masks outdoors, let alone the so-called science of climate change.

But we’re investors around here. We believe the technology, because it has to work and it has to be falsifiable (there has to be a way to prove that it doesn’t work). Science is full of hypotheses. Technology is full of machines that either function or not.

The information theory of economics works because an economy is a testing system and the marketplace provides continual entrepreneurial tests of a business ideas. Thus, Capitalism accumulates technological truths that comprise useful investments based on falsifiable prophecies. That’s our business here.

In Honor of the 50th Anniversary of Earth Day

As my readers know, Marian Tupy and Gale Pooley have been calculating the time-prices and implicit abundance of 50 key commodities, based on the amount a time a person needed to work to buy them.

Fighting China is a Recipe for Disaster

The Needle in a Haystack: Understanding Moonshot Entrepreneurs

Around here, we believe that the future is not algorithmic. There are no needles in that haystack of media clutter and clichés.

The Paradox of Specialization

Calling today’s focus on an old prophecy as I put the finishing touches on the May issue of The George Gilder Report.

Riding the Freedom Train to a New Economy

What to do about China…

The trial and imprisonment of Michael Milken was a crime in and of itself… and Trump’s recent pardon proves as much.

In an information age, economies can change as fast as minds can change.