When Will the Panic End?

Yesterday I shared an excerpt from this blog post from WIlliam Briggs. It was just too good not to share more.

Keep scrolling to read his views on the coronapanic…

You’ll have seen it by now, but if not, here’s the word from the CDC itself:

The remaining 157,504 died of other things — an average 2.6 other things! — with the presence of coronadoom. Some fraction of these poor people, considering false positives, died of just other things.

How many times, early on, did we scream, rant, and, yes, rave about juicing the numbers? The answer is a large positive number. Alas, the screams hit the ears of bureaucrats and politicians, our dumbest and evilest classes.

It must be recalled that many deaths were caused by the unnecessary lockdowns themselves. Lockdowns killed. This is not hyperbole or a guess. It is a fact.

The guy who calls himself Ethical Skeptic did an analysis of this fact, which I believe is in the ballpark: 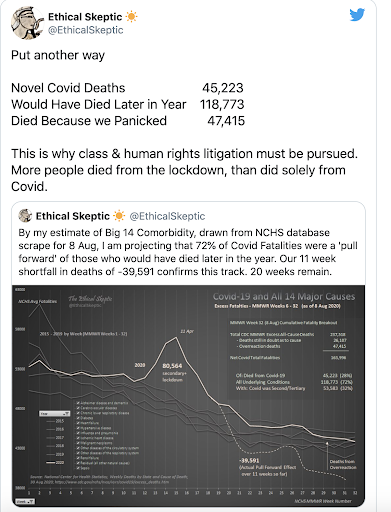 Argue about the details if you like. He might be off, and other estimates might be off, about who might eventually have died this year given the absence of the bug. It is clear, no matter what, that coronadoom was, when it was deadly, a catalytic killer only. It couldn’t do the job alone, but only with other diseases present, if indeed it was coronadoom and not the other diseases causing deaths. General lockdowns were therefore illogical, or should have been lifted soon after they were instituted.

There was never any reason to panic. The bulk of attributed deaths were north of 65. Meaning, again, lockdowns were never necessary. It became clear by mid April what was happening, as regular readers know. Yet politicians only grew more and more ridiculous in their responses, each trying to outdo the other in showing how much they “cared” — or in their desire to cause pain to influence the election and show you who’s boss.

We also have to consider the number of iatrogenic deaths, or deaths by doctor. How many people were killed by panicked doctors cramming tubes down their gullets in the Great Ventilator Scare? In the Spanish Flu, huge swathes of citizens were rubbed out by forcing buckets of aspirin into them. Were ventilators the leeches of our day? Was every patient intubated in critical need of air?

Before we talk about a reckoning, which will not be forthcoming, we have to ask when the panic will end.

A Blessing from China: A Challenge to Innovate

Some of my readers worry that I am “soft” on China, too optimistic about the prospects for freedom there, and unwary of the Chinese threat to the US. As one reader recently wrote, “at the end of the day China is still a communist country” which “does not recognize the right to private property,” and...

Israel and its Rise to the Peaks of the World Economy

The message of Israel’s achievement is that China — currently undergoing a similar surge of venture investment — maybe also able to accomplish a similar rise to the peaks of the world economy, despite signs of overinvestment in real estate and infrastructure.

Ajit Pai of the FCC Upends the 5G Debate

My world is turning upside down. As a supply side conservative, I find myself quoting my old nemesis Stephen Roach on economics and Communist dictator Xi Jinping on technology.

Matt Ridley’s superb new book on How Innovation Works that I touted here before publication is now on its way to best seller lists in the United States.

The Grave Disorder in Regards to Democracy

George is deep into researching and writing the next issue of The George Gilder Report, so today we’re going to take a look at an old prophecy...