All Around the COVID Globe

The most important investment story from day to day is still the devastating economic shutdown in the face of a routine medical event. An event that has not even changed the fact that 2020 is one of the lowest years for all-cause deaths in my 80-year lifetime. And the age of so-called COVID deaths is higher than the age of all-cause deaths.

But even the New York Times has now noticed the UN estimate of 260 million starvation deaths (many young people) from the global economic shutdown.

With no signs of medical benefits and overwhelming economic damage, the lockdowns have become an inexcusable case of political malfeasance.

Keep scrolling to read his thoughts.

All governments cracking down and removing liberties from citizens over coronadoom say they do so because of “THE science.” Not because of just-plain science, or even evidence, but because THE science says so.

THE science is, of course, whatever government dictates it should be. Government takes a line and declares it to be uncrossable, permanent, and guaranteed gold-clad capital-S Science. Give any skepticism, including true disproving evidence, about THE science, and one is labeled a “denier”.

Now where have we heard that before? And isn’t it curious that the solution THE science dictates is always the same whenever THE science is invoked? Greater restrictions on your liberties, greater progressive government control, in all perpetuity.

Take the state of Victoria in Australia, which is cracking down on deniers. It’s worth thinking about them because this is the direction all progressive governments are going. This will happen wherever progressives take over. Here is the state of crisis in all of Australia, not just Victoria. 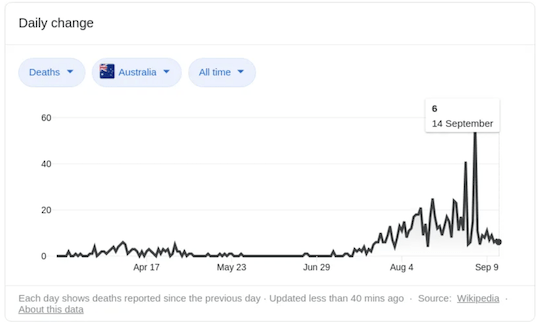 That’s a 6 at the end: in attributed deaths, which are greater than actual deaths — in their normal cold and flu-death season. There is no crisis in Australia. How are politicians reacting to this non-crisis?

THE science states that you are allowed to be outside for one hour every day. At 61 minutes, THE science says coronadoom will get you. If you sit during the corona-free hour, the coronadoom will also get you. The just-following-orders police nabbed a pregnant woman for her crime of Sitting During A Declared Crisis.

In Quebec, THE science says even cars can’t come within so many feet of each other. Excuse me: meters.

In the UK, THE science says if you gather in groups of 6 or fewer, coronadoom can’t get you. Have 7, and everybody surely dies. Boris Johnson, the “conservative” leader wants COVID Marshals to enforce the Rule of Six. But we wonder whether the presence of these just-following-orders police count toward group totals?

Boris also thinks THE science will tell us who gets a “freedom pass” and who doesn’t.

Also in the UK, THE science says deaths of any cause within 28 days of a positive coronadoom test must be counted as coronadoom deaths. (Follow Christopher Snowdon on the British situation.)

In the USA, THE science says if you stand up in a restaurant unmasked, the coronadoom will get you. But if you sit unmasked smacking your lips, belching, scratching, farting and sharing food, it can’t get you.

On and on and on it goes, with contradictory rules everywhere. THE science says one thing at A, which THE science at B says is false. And vice versa. But it’s all THE science! And THE science cannot be questioned.

The Grave Disorder in Regards to Democracy

We are living in the age of Aesculapian politics and even morality, when our leaders fear to appear in public without a physician in tow or scientist at his back.

Capitalism is an Information and Learning System

Inside, a lecture of mine regarding capitalism...

With Facebook unveiling its new Libra coin, the company has made itself extremely valuable…

The Rise of Silicon 2.0: Investing in the Next Generation of Semiconductor Tech

Inside, an excerpt from the January issue...

Let’s Turn to the Copperswaithe Solution

The Magic of Information Tools

Confined to our homes by gangs of viral predators in the streets, we find ourselves considering the magic of information tools.

George turns to a Nobel Prize winner to explain the chaos.