As usual, William Briggs has the most authoritative presentation of the data and most trenchant critique of the pols.

We have reached the point most authorities are pretending to forget the difference between infections, “cases,” and deaths. Deaths have dropped to bottom levels, but because of huge increases in testing, positive tests are up, causing new panic. The hunger to lock back down is great.

It’s A Crime To Maybe Be Sick

The state of Victoria is and has been run by progressives (i.e. “labour”) for some time. Its government has moved to the concentration-camp phase of its “battle” against a typical, not-at-all-unexpected-or-unusual disease.

Before we detail this and answer why, here is the state of the coronadoom crisis in all Australia (I took this snapshot from Google Saturday night). 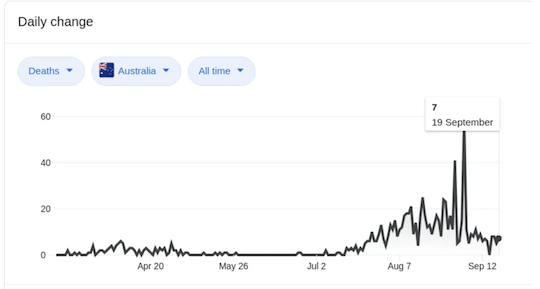 According to one source from 2019, all Australia saw an average 3.3 traffic deaths a day. So coronadoom is roughly on par with driving. Funnily enough, driving has not been outlawed.

Here are details of the COVID camps from one news source:

The Victorian government will debate a new bill in the State Parliament this week which would hand authorities the power to forcibly detain “conspiracy theorists” and people suspected to likely spread coronavirus, such as anti-lockdown protesters and their close contacts.

If passed, the Omnibus (Emergency Measures) Bill will allow the state to detain anyone they suspect of being “high risk” or likely to negligently spread COVID-19, either if they have the virus or have been in contact with an infected person.

According to The Age, a state government spokesman said the rule could be applied to “conspiracy theorists who refuse to self-isolate or severely drug-affected or mentally impaired people who do not have the capacity to quarantine.”

Those detained could then be placed in quarantine facilities, such as hotels, where they can be monitored by authorities.

I wonder if people who show actual data might be labeled “conspiracy theorists.” The data imply government is not needed, and this is a hateful message. Not only to those in charge, but to, it must be admitted, the majority of the population.

It’s not only these COVID camps, but the government is also creating an army of State Truth And Secrets Inspectors, or STASI. This new internal security forces corps “would allow people to be detained indefinitely and give sweeping powers to untrained people to become ‘authorised officers’ with sweeping powers to arrest and detain fellow Victorians.”

The best news, for those most terrified of the non-crisis, is that “Once detained you have no rights under law and can be detained for an indefinite period.” Also, “There is no provision whatsoever for a review of the detention.”

These harsh actions will keep the terrified safe from infection, or so the terrified believe, so the costs will be worth it. To them.

You can read the full update here.

My Mother, David Rockefeller, and the World Economy

I learned from the best…

The Polls are Simply Missing the Trump Vote

Living in a real life and death struggle…

Mind Over Matter: Setting the Record Straight on AI

The Biggest Scandal of the Decade

The Single Most Important Factor in Investment Returns

My detractors see paradigms as big blowsy marketing buzzes that have little traction in the real world of revenues and earnings. But big blowsy ideas can sweep you toward giant expanding opportunities.

GilderFest: Coming to a Screen Near You

hat’s going on in Vegas?

Through the Looking Glass: A New Age is Coming

A birthday-inspired spooky prophecy. Is China a trick or a treat? Let's find out...