This is the issue of the day and as always, William Briggs is on top of it.

Keep reading to see what he has to say…

There is no crisis in New York, and there hasn’t been for months.

The Godmother (Andrew Cuomo) is not the most brilliant ruler, but his intelligence is sufficient to understand that plot, which surely must have been brought to his attention. He therefore knowingly pretends there is a crisis when there is not, for purely political reasons.

This should be the real crime. It won’t be. He’ll get away with it.

The crisis is now purely driven by government testing, as described in detail below. After you read that, come back here and gaze at this, the number of daily tests in New York. 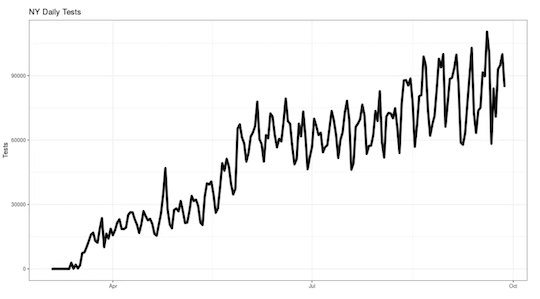 This is the biggest scandal of our times. But, like I said, they’ll get away with it. It’s too big an error to admit.

British ministers prepare for social lockdown in northern Britain, London: The Times. See below for the true state of the coronadoom crisis in all of the UK (hint: there isn’t one).

Coronavirus: UK winter could see 85,000 deaths in second wave, says leaked Sage report. This is 60% more than the first wave. Evidence for the second wave? None, save fear.

Face masks could be giving people Covid-19 immunity, researchers suggest. You have to hand it to academics. A helluva sense of imagination. If wearing masks provoked immunity, why not wear one all the time and be free of disease? Why didn’t evolution, or God, think of that?

Marc Siegel, M.D., clinical professor of medicine and medical director of “Doctor Radio” at NYU Langone Health, writes in The Hill (a prog site) COVID-19 facts obscured by the politics of fear.

El Tres writes in Epoch Times (a semi-prog site), The Idea for Pandemic Lockdowns Started With a High School Science Project. But those guys are trying to flog the book The Price of Panic: How the Tyranny of Experts Turned a Pandemic into a Catastrophe.

MASKING OURSELVES TO DEATH: A NEW ESSAY BY MARK CRISPIN MILLER, PHD: what appears to be a complete history of the mask in insanity, including links to literature (as we did) showing masks are not worth wearing if you’re not sick — and in this case young.

Sources: daily tests, CDC official toll number one, number two (CDC has two official sources that have differences). The media reports are always greater than CDC numbers. Yes, these are the sources, which is why I call them “sources”, for the data. The other is the Google: type [LOCATION] coronavirus deaths. So when you email or comment asking for the sources, here they are.

Let’s start with the bad news. The very bad news. Daily — as in daily — tests: 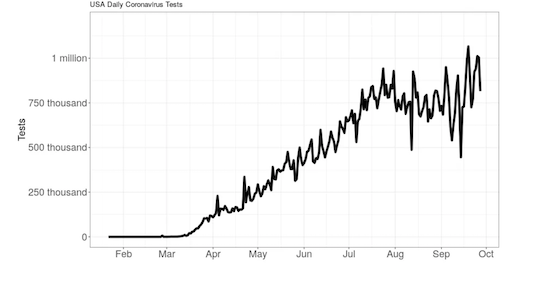 “Say, Briggs, why are you celebrating? You hate these daily tests. What’s so good about them continuing to increase with no end in sight?”

Because now we can do some fun math. Some are reporting a false positive rate of 1%. Nobody knows the actual number, because it depends on how many people have already got the bug, the different tests’ sensitivity and specificity, and so on. The WSJ, for instance, suggests an overall accuracy of 70%, which is what civilians would consider poor, but which doctors would not find unusual. The Cochrane review found false positives of 2% (and even up to 21% in some scenarios).

In the UK, one report says “After reviewing data from British testing centres, the government research paper released last month estimated that the UK’s false positive rate has a 50% chance of sitting somewhere between 0.8% and 4%.”

Our 1% guess is in the middle, or on the low end, of all these figures. It’s not wildly wrong.

Suppose nobody in the million tests we do today have an active infection. Then, with a false positive rate of 1%, 10,000 will be incorrectly identified as “new cases.” Every single day.

Reflecting on a Previous Pandemic

A Frenzied Carnival of Investment Ideas

During the first couple days of FreedomFest, I encountered two novel but representative investment ideas.

Blockchain: The Technology of the Future

Inside, an interview I did with Peter Robinson regarding blockchain.

Navigating the Frontiers of Investment Today

I fear my friends at Google declaring “quantum supremacy” are cruising for a bruising.

The Ultimate Lesson of the Ebbers Saga

Sights Set on the Israeli Spectrum

I’m currently traveling, so I thought I’d share one of my lectures on Israel...