Going to Extremes: The Reborn Potential of Technology Investment

Below, you’ll find an excerpt from The George Gilder Report.

If you’re not already subscribed, go here to get more information.

One of the themes of our portfolio is the need for extremes.

Extreme conditions under which semiconductor technology must function — as the computer migrates from the cozy conditions of your office, and out to an unforgiving world.

These extremes are a big part of why we think there is a new generation of wealth to be found in perspicacious tech investing.

The need for extreme performance is thinning the technology herd. Once venerable competitors are falling by the wayside, leaving billions in revenue on the table for the shrinking number of firms that can deliver.

You might think that Qualcomm, 20 years after the global triumph of its spread spectrum technology, would have more competitors today than it did back then. After all, even the most aggressive patent protection can’t utterly suppress the spread of a core technology.

Instead, we see just the reverse.

The Importance of Technology Paradigms

Qualcomm is probably more dominant today than in 2000. And it’s not just because of its patent portfolio. It dominates also because of design and process prowess — before which even mighty Intel was made to bow.

Apple wanted Intel to replace Qualcomm — which it had been fighting in court for years — as a chip vendor. In the end Intel could not deliver, abandoned the project, and Apple made peace with Qualcomm.

Just a decade ago, at least 10 different firms could realistically compete as makers of “optical engines,” the optical transceivers that send, receive, and decode photonic bits across fiber optic lines. Back in those days, sending 100 gigabits per second (that’s one hundred billion bits per second) down the line seemed like a miracle. It still seems like that to us. But it was a miracle that multiple vendors could pull off.

Today, the new frontier is 800 gigabits. We know you can do the math, but we just like saying it: that’s 800 billion bits per second. At those speeds only three vendors are still standing: and two of them are in our Gilder Report portfolio.

This is why technology paradigms are again, crucial to investors. When a technology becomes a commodity, easily replicable by many firms, other considerations such as business model, brand strength, access to capital, breadth of product line, and more may decide the competition. Commodity products are why brands were developed.

The Spotlight Shines on Silicon Substitutes

Silicon is the perfect material for computation in controlled environments. Switching at relatively low frequency and power, silicon enabled microchips with billions of circuits crammed into the area of a thumbnail to function without melting the material. More low power circuits switching a bit slower trumped fewer, faster circuits pumping out destructive levels of heat.

As micro-circuitry is increasingly used to control the physical world, we increasingly need chips that can endure not only the heat they themselves generate at higher frequencies and power, but the hostile environments in which they work. The next generation of cars and power supplies have requirements that exceed what silicon can provide, as do some of the mmWave communications technologies that are part of the 5G age.

There are several semiconductor materials that exceed the power handling and operating frequencies of silicon. Notable are Silicon Carbide (SiC) — a combination of silicon and carbon — Gallium Arsenide (GaN), Gallium Nitride (GaN), Indium phosphide (InP), and diamond (another form of carbon).

The exhibit below shows where these various materials rank in terms of power handling and operating frequency versus silicon. 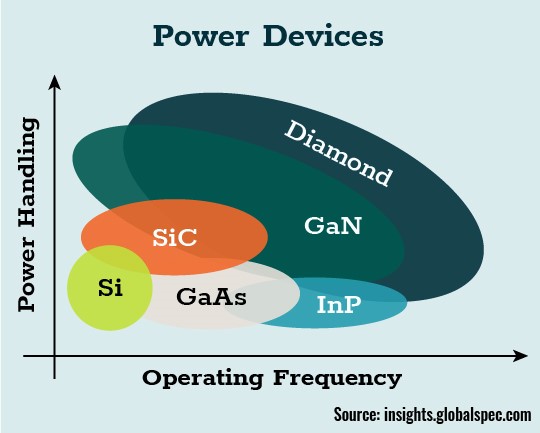 And you thought diamonds were just a girl’s best friend?

Silicon still reigns supreme for high speed computation, fed by those 800 billion-bit optical machines. But as the promise of the Internet is finally fulfilled in a world increasingly animated by machine intelligence, we recommend investors mind the band gap.

[Video Prophecy] Another Friday, Another Round of Questions

The next in this series...

An excerpt from the June issue…

The Paradigm Shift Has Begun

Ultimately, fortune will favor those willing to step beyond traditional US investment opportunities. Luckily, I have two options for you…

Let’s all of us get up and out of our lidded platonic caves, where we hunch and hunker down in the lambent shadows, taking our view of the world from television and other screens.

The Promise and Entropy of Information

On my plane to Silicon Valley I met an unlikely friend who inspired today’s prophecy.

The Age of Chicken Little

In an earlier prophecy, I wrote about Kary and his contrarian views on climate, ozone layers, and consensus science in general. Today I introduce Chicken Little himself, consensus science Professor Jared Diamond of UCLA and your Amazon best seller list, with books with names like Collapse and now Upheaval.